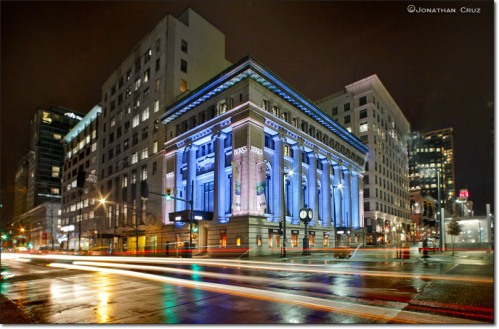 As we continue the countdown to the Vancouver Winter Olympic Games, which seems to be coming at us fast and furious with only 30 days to go, the city is preparing with a few final touches. One of which was the resurrection of the famous Birks Clock. 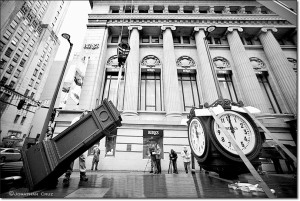 Situated on the corner of Hastings and Granville in front of the Birks store, the clock hasn’t worked for years, confusing many as they hoof it to work in the morning or back to work after a boozy lunch. They actually removed the time piece temporarily for 2 years to make way for Canada Line construction on Granville Street. The clock was first erected in 1909 and was moved to the corner of Georgia and Granville in 1913, where it remained until 1994 when it was moved back to its original home. Back in the day people used the clock as a meeting place before hitting the town – “meet me under the Birks clock”. I wonder if people still say that? Seems like it’s more common to say “meet me at the Starbucks on…”. How boring. 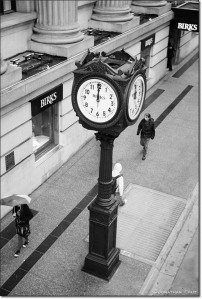 We had the opportunity to shoot the re-installment of the clock, following some much needed repairs by horologist Ray Saunders who gave the clock a complete overhaul and restoration. It was an exciting moment to see a piece of history put back in its place, where it will sit for many years to come. Now visitors to Vancouver during the Games and beyond will always have a point of reference while exploring our beautiful city.